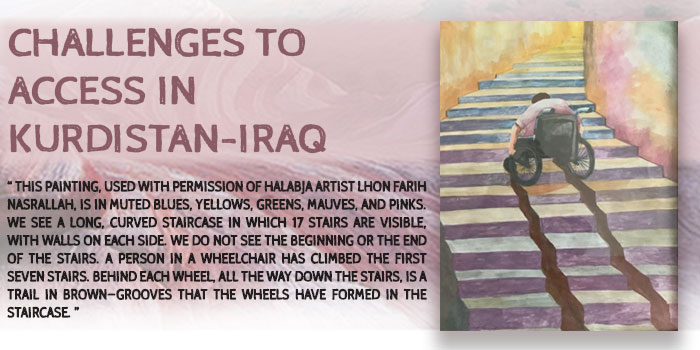 I am honored to offer the first article for the inaugural newsletter of the World Disability and Rehabilitation Professionals Association. The theme of our 2021 conference, the fifth annual, is “It Takes a Village: Accessing Disability Services Across the Globe.” Reporting from Kurdistan-Iraq, where an estimated (and probably underreported) 120,000 people out of the population of five million live with disabilities, I thought that it would be useful to talk about some of the factors facing people with disabilities (PWD) that challenge their access to disability services. We at the Center for Gender and Development Studies (CGDS) take an intersectional approach to social justice, with an emphasis on disability justice.

Iraq is a war-torn country, and Kurdistan, while at present more safe and peaceful than the rest of the country, does not escape this legacy. From Saddam’s genocide campaign in the 1980s to the ISIS invasion just a few years ago, war affects PWD in many ways. Even when there is no active combat, there are landmines, which have disabled a lot of people. The Handicap Union of Kurdistan is composed largely of people who have lost limbs, many from mines. Additionally, the trauma of warfare, including torture and displacement, has left its scars as psychological and psychiatric disability, for which there are staggeringly few services.

The Kurdistan Regional Government, a parliamentary democracy established in 1992, is having some growth pains. Much of the Kurdish population depends on the government for their salaries, including PWD who have pensions, but the government has been unable to pay these salaries. In 2020, only four months of salaries out of twelve were distributed, and these four salaries were reduced by up to 21%. The full monthly benefit for a disabled person would have been the equivalent of about $130 USD. Kurdistan has a lot of poverty in general; in particular, the Rozh Society for PWD estimates that eighty percent of the population of PWD lives in poverty.

Two very good laws, one Iraqi and one Kurdish, protect PWD and provide for them. Unfortunately, neither law has been ratified, and PWD report that when they push for ratification, they are stalled, for example by being asked for endless trivial details. In effect, then, there is very little legal recourse for even the most egregious discrimination against PWD. All of the seven major advocacy organizations for PWD in Sulaimani have fought tirelessly for these laws to take effect, to no avail.

In addition to legal and political impediments, the social aspect of stigma prevents PWD from moving freely and having access to the services that they need. People with disabilities are often hidden away at home. Families are reluctant to admit that they have a disabled family member. The Brain Paralysis Organization wants to be very clear about their term for many people with Cerebral Palsy: isolated and without services, they spend their life as “living corpses.”

Women with disabilities have a double stigma. In this traditional society, a girl’s role is to be married and have children. Female PWD are at a double disadvantage at least. Without the time, resources, or support to deal with menstruation, for example., families opt for hysterectomies (in addition to the female circumcision—for disabled and nondisabled girls—that is still practiced in some places). Even without a hysterectomy, disabled women rarely bear children because beliefs remain, some accurate and most inaccurate, about transmission of the disability.

At present there is no history of disability or PWD in Kurdistan, even though a history is so important to acknowledging a common culture. There is very little sense of disability culture, disability pride, or disability cool. While there are, of course, disabled artists and craftspeople, the products are often sold along the fundraising or charity model. Speaking of charity, private companies and religious institutions provide much more support for PWD than the government. While this support is critically needed, it creates a vicious circle, reinforcing the misperception that PWD can’t work.

The immediate barrier to service access is the most obvious: in general, PWD are unable to maneuver around any public area, or to enter any given building even if they are able to reach it. Whether blind, cognitively disabled, deaf, mobility impaired, on the spectrum of autism, short-statured, psychiatrically disabled, or in any other way disabled, this part of the world is inaccessible.

CGDS is happy to be part of WDRPA, and my hope is that, working together, we will improve the world’s access. One of the first steps is awareness. 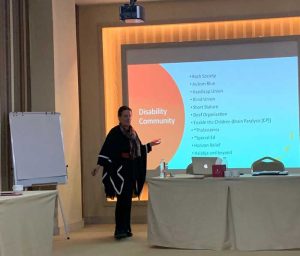 Photo description: A woman with her hair pulled back, wearing black trousers and a white-edged cape, stands in front of a large screen, gesturing at it with her left hand. On the screen we see the words Disability Community in white font on an orange circle, and to the right, eleven names of disability organizations in dark blue font. To the left of the screen is a white flip chart, and a fabric-draped table is in front of the screen. 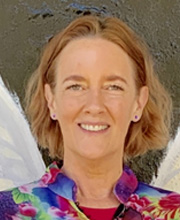 Disability and the Language that We Use
September 3, 2021

Fighting for a Better Way to live in Darkness
August 30, 2021